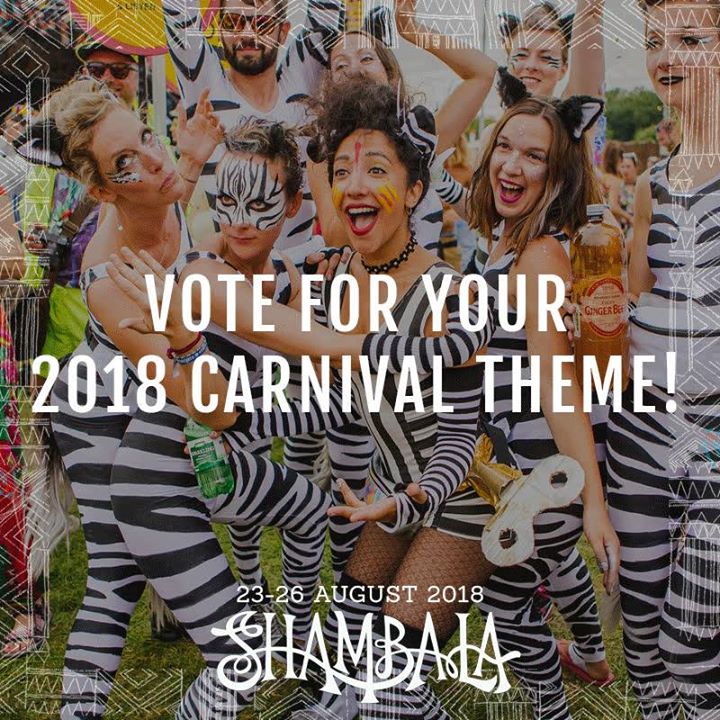 ⭐️ IT’S CARNIVAL THEME VOTE TIME! ⭐️
We’re asking YOU to vote for your Shambala 2018 carnival theme. Follow the link at the bottom of the post to vote – Facebook comments will not be counted!
Your options are listed below – voting will close on 27th February at 12pm sharp – shortly after which we will announce your winner – and then the costume creation can commence in earnest!

Without further ado, your options are…

1. THE TOY BOX
A frozen ballerina awaits the turn of a key, to begin her hypnotic, mechanical dance. Transformers assemble around the lake, now infested by a hoard of hungry, marble-crazed hippos. Human slinkies tumble across the landscape, entangling families of marionettes and leaving the rag dolls in stitches. A communal step back to those halcyon days of childhood, when the worst that could happen was stepping barefoot on lego.

2. THE TIME TRAVELLER’S BALL
At a secret location in Northamptonshire, scientists have reported a serious rip in the space time continuum, with creatures and characters both historic and prehistoric pouring in for the party of the centuries. Viking hoardes are sailing across the lake, Victorian urchins are queuing up for rides on a woolly mammoth and we’re sure we just saw Cleopatra sneaking off into the woods with Aristotle…

Facebook comments will not be counted – you must cast your votes HERE: http://www.shambalafestival.org/vote-2018-carnival-theme/

So last night whilst we were fast asleep, you absolutely incredible human beings SMASHED through our crowdfunder stretch target.

The amount you have collectively raised will go a long, long way towards helping us climb out of the financial hole that losing this years’ income has left us in, and though we don’t really have the words to express our gratitude, we’ll give it a good crack anyway...

The past few months have been incredibly tough for us – both financially and emotionally – but the support that you, our amazing community has shown us, has absolutely blown our minds. You came together and caught us when we were falling – and for that, we will be forever grateful.

A huge thank you to everybody who has rolled their tickets over, made a donation, claimed a crowdfunder reward or even just dropped us a line with such kind and loving words about Shambala – we are truly overwhelmed by your kindness and community spirit.

We’ll leave the crowdfunder ticking over for these last five days before the deadline, in case any of you are still keen to get your mitts on any of the rewards – we’ve currently got just 9 ‘Guaranteed 2021 ticket rewards’ remaining, and there’s still time to enter the draw to win 2 lifetime tickets, as well as the art prints and merch - here's the link: www.crowdfunder.co.uk/keep-our-adventures-in-utopia-safe

We can not WAIT to be reunited with you all, for the silliest, fluffiest, cuddliest party in our 20 year history. Here’s to lake-side lazing, enchanted-woodland raving, carnival strutting, power ballad crotch-thrusting and an icy cold pint in the Wonky Cock. Here’s to you lot.

Hi there could I just ask what sort of prizes will be for people who choose to roll over their ticket and add the 30 donation? All my friends have done this which is wonderful but I lost my job before covid and not sure I'll have enough to do it but also I dont want to be ragingly jealous of everyone else going to or experiencing some crazy things and I get left alone hahaha (Definitely a selfish ask and I am sorry for that if I had the money I would throw it all at shambala as it is my saving grace each and every year) So happy you managed to reach the targetxxxx

Woohoo!! I never had any doubt you’d smash it. This is absolute cold hard evidence of of good karma right here in it’s entirety xx Best place and people on earth!

Well done Shambala! This is what happens when you give love to people - they give love back.

How long is this open for? Man has his eyes on a few packages once I get paid in a week!!! 😀

AIDU: Live From The Jam Jar - Episode 3.
If you're enjoying the show, do throw a tip in the tip jar, for the amazing featured artists and hard working production crew! www.paypal.me/thekambefoundation ... See MoreSee Less

The amazing Millicent Chapanda now, on the Mbira. Beautiful.

Ahhhh I love her <3 This Is The Kit are an absolute fave.

Hey folks - apologies for the delay in getting AiDU Presents: Live from The Jam Jar (Ep 3) live on Facebook this evening, few little technical gremlins - should be with you shortly but you can watch it live on the AIDU website right now! Enjoy! ... See MoreSee Less

Tune in at 8pm on Sunday, 5th July for Episode 3 of Live From The Jam Jar featuring: > musical performances from Spindle Ensemble
View on Facebook
·Share

A little teaser of what to expect from AiDU Presents: Live from The Jam Jar (Ep 3) - broadcasting at 8pm this Sunday! Tune in here on Facebook or over at the aidu.tv website for:

The live music industry is fighting for its life. We have to do whatever we can to save and protect it. Live music is way too important to lose. Throughout the show, we'll be asking you to donate what you can - all donations will go to the featured artists and production crew, with any surplus being split between a range of music charities.
#LetTheMusicPlay. ... See MoreSee Less

Rainy Thursday morning made infinitely cheerier by discovering our fellow festival professionals voted us their no. 1 Favourite UK Event in Stand Out Magazine's #thecrystals2020. Awards are lush, awards voted by your peers are lush-er-er. Here's what they had to say about us:

'Shambala Festival should have been celebrating it's 20th anniversary in 2020 but alas, like so many other festivals it has postponed its Adventures in Utopia until 2021 Still, the sold out arts and music festival can now celebrate being voted the event industry's Favourite UK Event. Shambala is big on community, has sustainability at its core and is never scared to be the first one to stick its head above the parapet. It's pioneering and fun and that's why it's won.'

Huge thank you to everybody who voted!

Fantastic. It’s the festival world’s festival of choice. You knows it. Don’t know why I went all Goldie Lookin’ Chain but there we are. Big love. We’ll miss you so much this year but we’re building up energy for the party to end all parties, 2021.

Fantastic news!! Congratulations to you all at Shambala!! 🙏💕😍

Congrats- we all knew you were no 1 🙂

Working with oxfam. Roll on next year

Congratulations to you all 🥳🎉xx

Not surprising at all, congratulations to all concerned!

Not surprised to hear this 😊