Tomorrow night! The second semi final of the The Big Red Ramblin’ Man Rumble takes place for a chance to play this year’s Rising Stage and the contenders are… 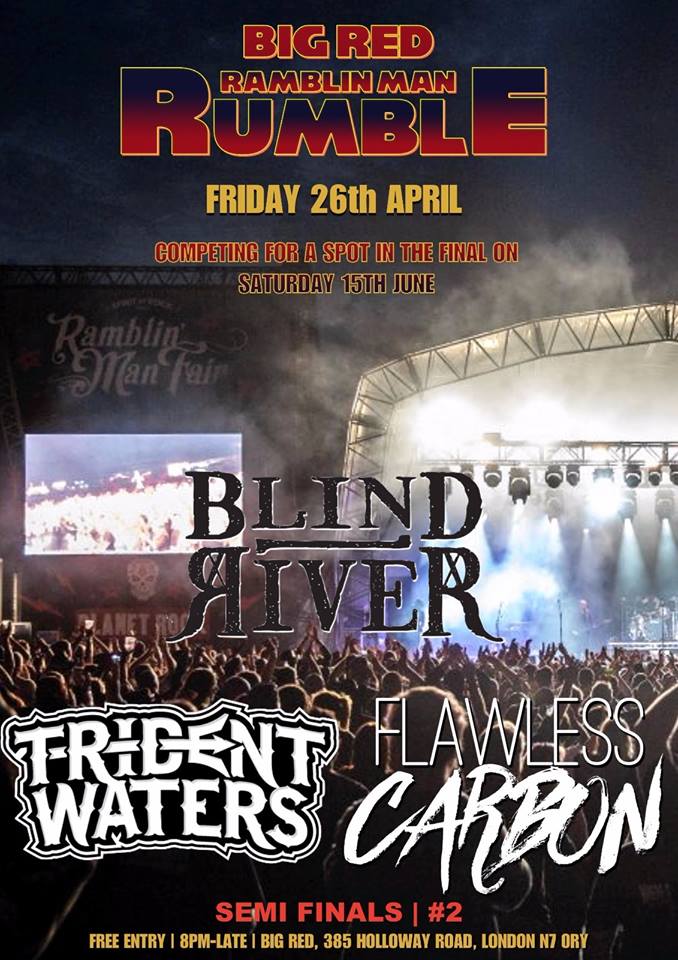 You will of course have seen that both Glastonbury and now Download festivals have had no option but to cancel their events in June. Perhaps now you are wondering what intentions we at RMF HQ may have toward our own show. So here it is: as the situation currently stands, we are still very much intending to go ahead with Ramblin Man Fair 2020 over the weekend of July 17-19.

If the obvious needed to be stated: there are significant differences between the vast scale of both Glastonbury and Download and that of RMF. Both Glasto and DL require significant Police and Emergency Services support, not least to help shut down motorway exits. Clearly RMF does not draw upon such state resources at our level of attendance. Moreover, Glasto is so big that it actually starts the perimeter fence build in March - and due to the current lockdown that process couldn’t be started, and as such was one of the main logistical reasons for them opting to take a fallow year and let the farming ground recover.
The way we see it is if the ban on mass gatherings has lapsed by mid June - and we are all rather hoping that it will, aren’t we? - then RMF will go ahead as planned. If it hasn’t or if it categorically looks like a lift on the ban won’t happen in June by an obvious point earlier than that (like a govt edict for all summer events stating so) then of course we will be looking at taking different decisions.
In the past couple of weeks the RMF team have been in constant contact with the artists booked to play this year’s festival. Over 90% of them have stated that they still intend to come and play this summer - including those from America.
But let us be realistic for a moment, Those same US artists stating now, in late March, that they feel that they will be prepared to travel in July to play in the UK could well be making a different decision as a rapidly developing Covid-19 picture unfolds around them and more lockdowns are issued. As such, we at RMF are drawing up a list of bands based in the UK who have found that conversely, they too aren’t now able to tour the US this summer either. So, even if those US artists do change their minds about RMF then there is an intention to still go ahead. But hey, when you listen to Trump, the US will have Covid-19 licked by Easter, so who are we to worry?

Well said, as long as we all do our bit for the now, together we can make sure our events get back on track. As one member of Bad Touch, we are beyond honoured to be on the main stage this year and we sincerely hope it can go ahead. So everyone stay inside, stay safe and let’s make this year the year that we all pulled together to beat this thing ✌️

Keeping everything crossed. Your planning is excellent. Let’s hope the current bill stands, its excellent, but I’m sure we’d all support the “substitutes” too 🤘🏼

Thanks for a detailed update. Here's to hoping it all goes ahead. Great job team RMF! ❤️🤞🤘

Thanks RMF for once again being honest and realistic. This is such a brilliant festival and even in this mad situation you have lifted the mood significantly. Very much hope to see you this year - if not I will be first in line for next year 😀👍🎶🤘🎸

Thank you for taking the time to make sure a well-explained post. Good luck to all at RMF team, and hopefully we'll be able to enjoy in July

Fingers crossed it will go ahead but better to be safe than sorry.

Many thanks RMF for the update and your continued planning . It gives us a hope that we will all be together again come July and what a party it will be if it goes ahead 🤘🤘

Thanks very much. Whatever the outcome, we Ramblers are with you. You're stuck with us!

Thanks for keeping us updated. Let’s hope the outcome is all we are hoping for. 🤞Cheers!!

Since my download plans have been foiled, if you guys are still on I'll probably book up a ticket closer to the time

🤘❤🤘 An excellent response from the RMF team, thank you. We are all hoping our favourite festival goes ahead and we will all be raising a beer or two to an excellent lineup.

Once again RMF explain how and why things work, so as customers we know where we stand. Thanks guys, and let’s hope those Metal Gods are smiling on us this summer

Fingers crossed it will go ahead & that the line up stays the same! 🤞🤞

Well done RMF! Thanks for the clear message!

This and Stonedead Festival are the only 2 left on our bill that haven't yet been cancelled, I've got fingers, toes and everything else crossed, we will be happy either way, thank you for the update xx

Brilliant! It’s great to have something to look forward to. And if everyone stays in as far as they can, it should all be finished by June. 🤞🏻🤞🏻🤘🏻

That’s good news, We need something good to look forward to in these current times!

Nice to hear some good news for a change ...keeping everything crossed ..almost my dream lineup this year ...cheers RMF for the best festival out there ...👌

Thanks for this measured , honest & hopeful update .

This is up there as one of our favourite Ramblin' Man memories with you all, during Black Stone Cherry's headline set last year!

Tonight we want to join you, our Ramblin' Man Family, and everyone in the UK, in saying THANK YOU to all the health and social care staff working tirelessly during this difficult time!
Join us from wherever you are and clap and cheer them as loud as you can (and we know you know how to make some noise Ramblers!)👏🏻

Discovered these guy at rambling man seen them several time

Got any questions you've always wanted to ask Kris Barras Band? Or a song you want to hear him play? Then head over to his page at 3pm today to drop your suggestions and tune in to his livestream this Sunday, we know we will!

One question why did you tone the 2nd lp down take away the rawness, it's kind more main stream and that sucks, I know you have to progress as an artist but hey none of these songs are as strong and stand outish as the first LP which rocked with out a shadow of a doubt, third time lucky and rock the blues out of it cheers a fan

AlwaysOutlawUK have added the next 10 movies to their top 50, have you watched any of them yet? What's your favourite so far?
And do you have any good movies we should check out? 🎥Bored? Need a good music fix on a big screen? Well, Outlaw got down to some serious sofa business and road tested the Top 50 music films of all time. Now this isn’t LIVE music performance films – but films with rock music pieces in it, about it or made by rockers or about rockers. You’ll figure it out. What it means is there’s no Straight Outta Compton or Purple Rain air 8 Mile in this List. Right?

Make sure to check out our review on each picture and let us know which ones you've seen already, and which one will you watch next ♠️ ...

Sound City is a fantastic documentary from Dave Grohl. As far as actual films, CBGB was a pretty good film.

2 great films for any stoner fans

Outlaw put in some serious sofa time and are bringing you their top 50 music films of all times! Here are the first ten to keep you busy and entertained 🎸

Any favourites among this list, or any on your "to-watch" list?Bored? Need a good music fix on a big screen? Well, Outlaw got down to some serious sofa business and road tested the Top 50 music films of all time. Now this isn’t LIVE music performance films – but films with rock music pieces in it, about it or made by rockers or about rockers. You’ll figure it out. What it means is there’s no Straight Outta Compton or Purple Rain air 8 Mile in this List. Right?

Make sure to check out our review on each picture and let us know which ones you've seen already, and which one will you watch next ♠️ ...

Only seen The Commitments and Empire Records. Must check out some more on this list. 🤘🏻🎸

By Festival Flyer 5 hours ago

By Festival Flyer 6 hours ago