New talent to shine at Tramlines 2019

New talent to shine at Tramlines 2019 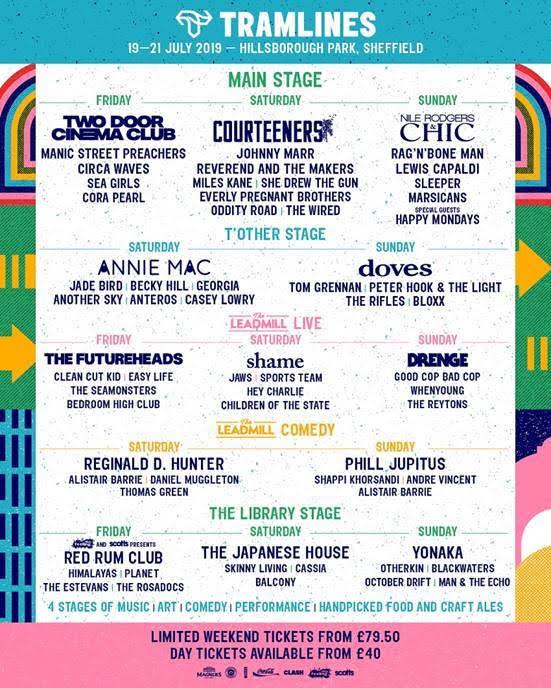 Sheffield’s biggest party, Tramlines Festival, is thrilled to announce 12 new additions to its 2019 lineup comprising of some of the hottest breaking talent around. From thousands of entries via the festival’s Apply To Play scheme, six acts were selected by a panel that included Jon McClure (Reverend and The Makers), BBC Radio Sheffield, Clash Magazine, the Leadmill and Tramlines’ organisers. A further six were chosen by BBC Introducing as part of a wider relationship with BBC Radio Sheffield, which will include multiple live broadcasts on various shows over the festival weekend from an exclusive backstage performance area. Tramlines takes place from 19th to 21st July at Hillsborough Park across four stages of music and will feature headliners Two Door Cinema Club, Courteeners and Nile Rodgers and CHIC, alongside Rag’n’Bone Man, Lewis Capaldi, Manic Street Preachers, Reverend and The Makers, Happy Mondays and many more.

Newcomers have been selected by industry officials, artists and BBC Introducing through ‘the Apply To Play’ process, including:

Since its inception 11 years ago, Tramlines Festival has continued to offer a platform to new talent from across the UK and on its doorstep in South Yorkshire. Sharing the same ethos, BBC Introducing on BBC Radio Sheffield focuses on showcasing local talent with many aspiring bands and acts receiving their first radio support from this show. In this spirit, presenter Christian Carlisle has selected six local acts to perform at Tramlines in 2019.  These include the powerful vocals of Before Breakfast, who will be joined by alt-grunge rockers Hands Off Gretel, while indie vibes come from Oh Papa and Exiled. Sheffield based rapper and Tramlines veteran Matic Mouth will perform solo following a guest slot with Steve Edwards’ Universal Tree group last year. The final addition to this group is Guest Singer who explore the dark side of pop music. These acts will be performing at The Library Stage over the weekend.

Katrina Bunker, Editor of BBC Radio Sheffield, said: “Tramlines has grown into such a huge festival for South Yorkshire and we’re thrilled that BBC Radio Sheffield is going to be so involved this year.  We’ll be hosting several programmes from our BBC tent in Hillsborough Park across the weekend featuring live acoustic performances from some of the acts and some exclusive interviews. We kick off our Tramlines coverage with a special preview programme on Thursday July 18th presented by Christian Carlisle.  He’ll be following the appearances of the six local acts he picked to play across the weekend.  We’ll also have special programmes from the festival on Friday, Saturday and Sunday, with the chance for festival goers to come along and get involved.  It’s really exciting to play a part in celebrating such a big weekend for our area.”

In keeping with previous years, the Tramlines team was overwhelmed by a huge number of entries to ‘Apply To Play’. Notable bands discovered via Apply To Play in past years include Blossoms who later were nominated for a Mercury Music Prize in 2017, showing what an important, career-launching platform this can be. For 2019, Tramlines enlisted the help of industry experts at BBC Radio Sheffield, Clash Magazine and the Leadmill, plus Jon ‘The Reverend’ McClure to handpick just six lucky acts.

The Apply To Play winners are a diverse bunch including ‘art pop’ from Fauves who take their inspiration from ‘Fauvism’, an early 20th Century French art movement, and Perfectparachutepicture who have a unique noise rock sound. Speed For Lovers are heavily influenced by the sound of Sheffield’s clubs with their ‘disco-not-disco’ sound, they have already received airplay from Steve Lamacq on BBC 6Music. Ambient alt-pop act LIO played the Tramlines fringe last year but make their Hillsborough debut in 2019. They are joined by indie rock band Graces who have collaborated with Phil Gornell of Bring me the Horizon and Matthew J Hall, a dark pop act to complete the new acts for 2019.

Timm Cleasby, Tramlines Head of Operations said: “We were blown away by the amount of applications to play Tramlines 2019. The selection process is always a great journey of discovery. Listening to so many brilliant acts gave us some really tough decisions to make and whittling it down to the shortlist for the judging panel was both a pleasure and incredibly hard as there were so many great acts to choose from. The final 6 are a brilliant selection of diverse, interesting and exciting new acts and we’re super chuffed to have them join us. Make sure you catch these now before they get huge. I’d also like to thank everyone that applied this year, there were so many great artists we could have filled the slots 10 times over.”

Whilst the Tramlines line up gets bigger each year, it remains seriously good value for money. A very limited number of day tickets can now be purchased from £40 +bf. Tickets have sold quicker than ever in 2019 but an extremely limited quantity of final tier weekend tickets priced at £85 +bf are still available for purchase. The option remains to split this cost over 2 months using the payment plan. VIP upgrade tickets are available for an additional £50 granting access to the private VIP area situated right next to the main stage with private bars, food stalls and toilets. Under 12s go for free. For full ticketing info including monthly payment plans, visit www.tramlines.org.uk.