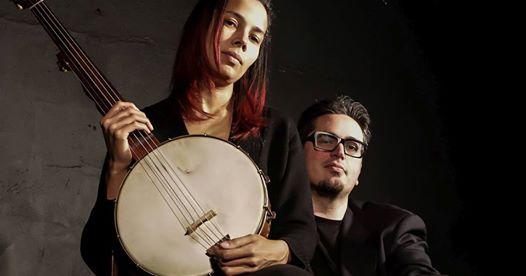 'Contagious delight and furious defiance. Giddens covers solemn material but her history lessons are thrilling and delivered with pure enjoyment' (★★★★★ The Guardian)

Rhiannon Giddens, who had previously won accolades with the Carolina Chocolate Drops, has released two great albums on Nonesuch Records – Freedom Highway and Tomorrow Is My Turn. She has also recently released Our Native Daughters, a collaborative project with Leyla McCalla, Amythyst Kiah and Alli Russell of Birds of Chicago, which explores the historical experience of black women in the US.

When Rhiannon Giddens met Italian pianist and percussionist Francesco Turrisi, well versed in jazz, early music and Mediterranean music, they found that her 19th century American minstrel banjo tunes and his traditional Sicilian Tamburello (tambourine) rhythms fit very naturally together. They soon discovered the reason for that – their respective roots coexisted in the past. Pictures of early minstrel artists all represent banjo and tambourine (called tambo) together, where in many cases the tambo is held in the same manner of Southern Italian tamburello traditions today.

The massive effect that West African music and dance has had upon American culture is by now well known; but centuries before, European music was being transformed by Arabic and North African modes, instruments, and rhythms. Working together they trace this musical globalism by reimagining the encounter of the banjo and the frame drum, and other instruments, through their journey from Africa, the Middle East, through southern Europe and England, and over to the Americas
They release their album there is no Other through Nonesuch next month. Produced by Joe Henry and tracked over an intensely productive five day period in Dublin, the new record is at once a condemnation of “othering” and a celebration of the spread of ideas, connectivity, and shared experience.

Watch the video for I’m On My Way from the upcoming album here: smarturl.it/thereisnoother

Sending lots of love and good vibes to my fellow End of the Roaders. Fingers crossed we’ll all be together pints in hand in a few months. ❤️

I have a feeling that the apocalypse will be over by then.

Keep on keeping on X

I’ve been thinking about EOTR a lot - a beacon of hope for my 2020 music adventures! We Had some great gigs lined up between now and June which have already been cancelled or are likely to be...and with good reason I know, but here’s hoping we can still enjoy the wonderful experience we always have at EOTR! Stay safe everyone.

Here’s hoping we all get to wander round gorgeous Larmer Tree Gardens in the sunshine in September!

That is hopefully going to be one massive celebration festival! 🤞🏼

Boy, do we need this. I'd temporarily stopped checking out the acts that were new to me because it was too dispiriting to think it might not happen. Of course by the time we get there it's possible the line ups going to look pretty different as bands have had to shift their schedules around. But given the chance I'm sure we're all going to turn up and share the love. ✌

got everything crossed it's going ahead

You are one of the few smaller festivals that seem to be taking this seriously and posting relevant updates. I would love to attend but who knows how this catastrophe will turn out. Thanks for a wonderful festival and i hope we all get back on track soon. Stay safe to all your staff.

🌱 We're delighted to present to you the winners of this year's Play EOTR competition, in the shape of Melin Melyn, Marlaena Moore and James Leonard Hewitson. We’re talking three incredible new bands that were hand-picked from a list of thousands of hopeful applicants and have won a spot on our 2020 bill.

By Festival Flyer 3 hours ago

Into the Wild Festival news: The time will come

A New Day Festival news: This is very clever – enjoy…