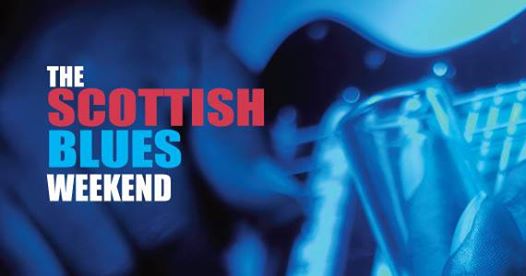 Edinburgh Jazz and Blues Festival launches a new annual winter Blues Festival – dedicated to the best of the Scottish Blues scene. Each year we’re going to ask a leading blues musician to select a programme and first up is Scotland’s champion of classic blues, Richard O’Donnell. He’s selected “the very best current and new generations of Scottish blues musicians in more traditional and authentic styles of blues music”, and with the added bonus of two of the very best International blues artists in the classic style, as guests for the weekend: Øyvind Stølefjell and Big Jon Atkinson.

Kyla Brox + Blue Milk
Voodoo Rooms, 7.30-11.00pm, £15 from http://www.edinburgh-blues.uk
UK Blues Challenge winner, Kyla’s voice offers a stunning example of the soul singer’s art: turning up the heat by degrees, lulling and charming before unleashing emotional catharsis, and blurring the distinction between pleasure and pain like the soul greats of old. Glasgow-based guitar power trio,Blue Milk cover all the bases from the Delta to 1960s blues rock.

The Late Night Blues Jam
Teviot Row, 10.45-12.30am, £5
Hosted by Mike Kearney and Jed Potts, the stage will be open for all the Weekend’s musicians to step up and show their stuff.
Tickets Via The Hub – http://bit.ly/2Rvqq0b

Closing Concert:
The Big Jon Atkinson Band
St Brides Centre, 7.30-9.30pm, £15
Across the American Blues scene there’s no young musician who stands out more as the keeper of the Blues flame in the 21st Century. Jon Atkinson sings; plays low-down and nasty, bottle-neck slide guitar; full on early Chicago style lead; and gut-bucket harmonica. Mid-century electric blues is a specialism, and he plays everything from in the pocket Memphis/Sun covers to wild interpretations of raw post war Chicago gems.
Tickets Via The Hub – http://bit.ly/2DcmbxD

Starting tonight, our friends at EIF are marking what would've been the opening weekend of the 2020 festival with a series of online collaborations celebrating the creativity and resilience of all those involved in Edinburgh and its festivals.

The International Festival present a programme featuring finest performers and ensembles from the worlds of dance, opera, music and theatre on 2-26 August 2019.
View on Facebook
·Share

Starting tonight (and then every Friday in August) our friends at the Edinburgh Festival Fringe are cooking up a feast of comedy and entertainment!This Friday, the first edition of the punchy new Fringe cabaret - AJ Bell Group Fringe on Friday – is being live-streamed at 9pm, with unique performances from 9 acts for just £9!

The debut show will be hosted by Suzi Ruffell and feature performances from acts including David O'Doherty , Lost Voice Guy and Tiffany Stevenson, among others.

You can view this Friday’s full range of performers, and secure your tickets, by following the link below. Don’t worry if you can’t tune in live either - the show will be available to watch online until Monday 10 August.

We were very sad to learn of the death of Jim Petrie, remarkable trumpeter and vocalist, and stalwart of the Edinburgh Jazz & Blues Festival.

Graham Blamire has written an appreciation of one of our best loved jazz musicians: edinburghjazzfestival.com/about-the-festival/news/jim-petrie-an-appreciation.html ... See MoreSee Less

The loss of Jim Petrie in his 84th year after a remarkable playing career of over 60 years, deprives the traditional jazz world in Edinburgh of one of its most respected and admired – it would not be an exaggeration to say best loved – jazz musicians and band leaders.
View on Facebook
·Share

Such sad news, Jim was in my class at North Merchiston and we were good friends.

Check out the full programme from our friends at Edinburgh International Book Festival - starts 15 Aug!🤔 Not sure where to start exploring our 2020 programme? Journey from issues affecting us all – climate change, racism, gender and identity and global politics – to the best in fact, fiction and poetry using our themes page.
Dive in: www.edbookfest.co.uk/the-festival/whats-on/themes ... See MoreSee Less