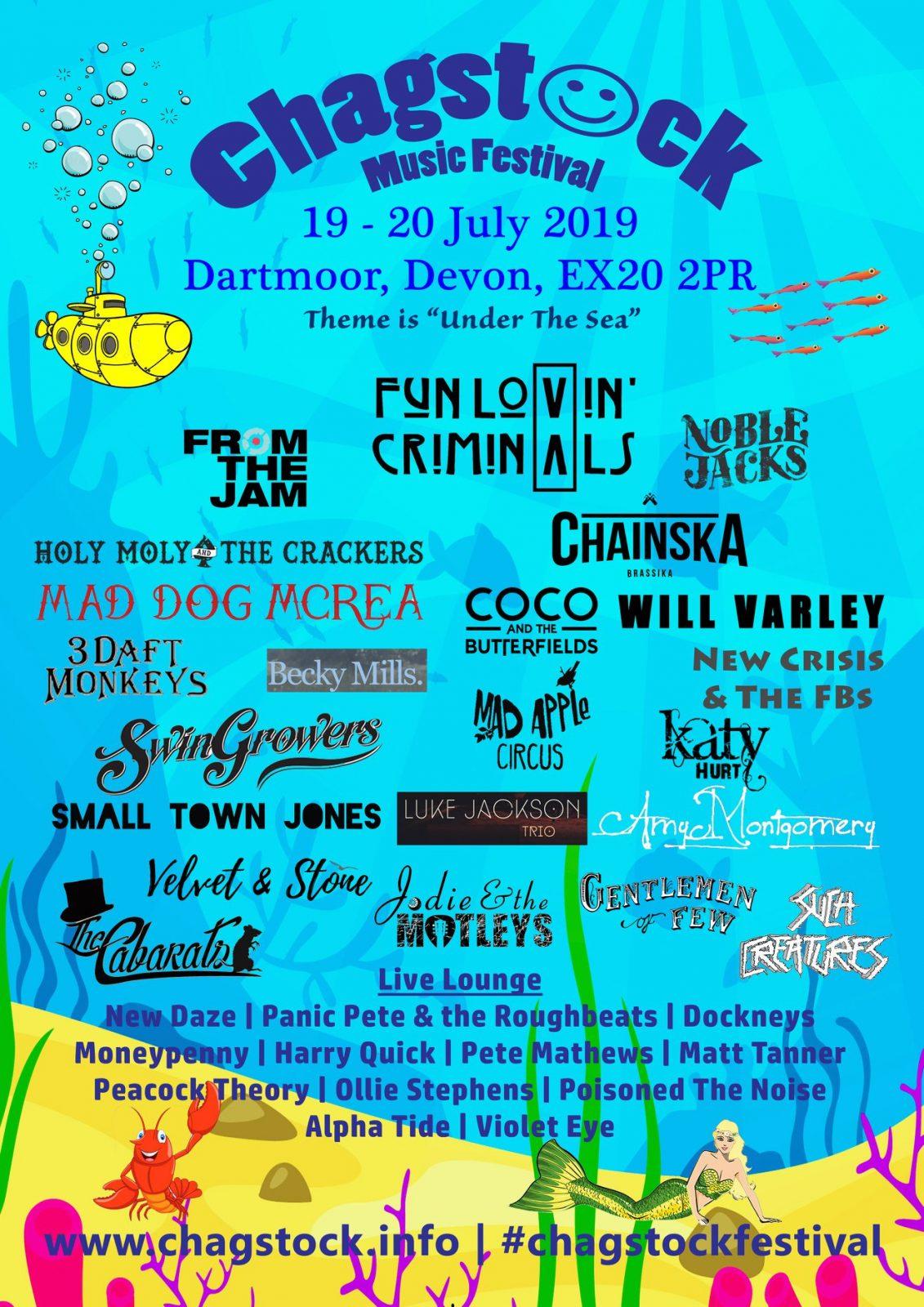 Don’t forget, we’ve got Spotify playlists for both the Main & Marquee stages.

Some great tunes that may kick-start summer, June’s a write off, July WILL be a scorcher! 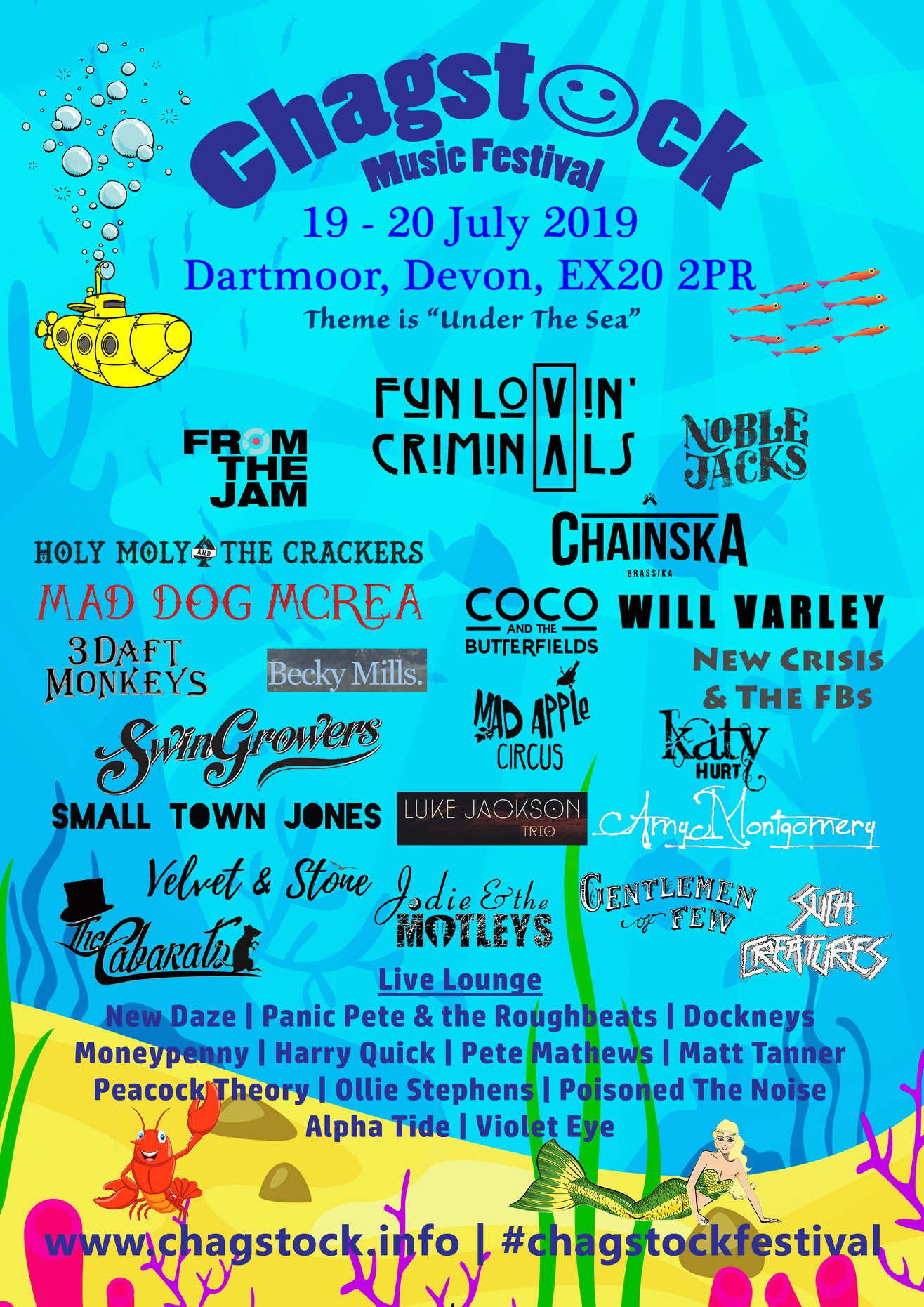 With regret, we have to announce that Chagstock will not take place in July this year. This pandemic is likely to be with us for some time to come, in some form or other, and whilst we will hopefully start to get back to some kind of normal fairly soon, until there is a vaccine and reliable mass testing, the danger is still out there. First and foremost the safety of our audience, artists, crew and everyone involved is paramount. I know we all want to get out and party but we have to be sensible and realistic about this. These are unprecedented times!

In order to preserve as much of the line up as possible, including our two headliners, and fit in with suppliers and so on, we have decided to postpone until July 2021. Most, if not all, events are postponing until next year so it makes sense to stick to the usual weekend for Chagstock. The festival will therefore take place on 23-24 July 2021. All tickets purchased so far will of course be valid and we hope you will all stick with us and continue to support Chagstock. If you can’t make the postponed event then we will offer refunds. These need to be claimed within the next 28 days. ... See MoreSee Less

I think that is the best decision, of course I will miss everyone's smiling faces, crew and revellers alike. But don't forget, it's the virus to blame, and definitely NOT the organisers, not the musicians and not the government, Its to keep EVERYONE SAFE. See you all next year and stay safe and well

Please make sure Seasick Steve, Elles Bailey and Otway are there next year! A shame but not a surprise. See you next year!

Definately the right decision in the circumstance. Stay safe from everyone at Quorum.

Perfectly understandable. However, very sad that Covid 19 has enforced our first absence since we started attending on my daughter Molly's 1st birthday. It is now tradition for the main stage to sing happy birthday to her and we feel robbed! 😔🥺 xx

Although not unexpected, so sorry to hear that Chagstock has become the latest victim of this pandemic. I sincerely hope that with all our help it will survive and we can come back next year and party twice as hard. Long Live Chagstock!

Andrew Smith Karen Smith Karen Freeman Patricia Upham Florin Papp another sad decision, but the right one I think. 2021 is going to be amazing!!! 😍

Lucy, Diane, Matthew, Mark - we all in for next year - please say yes? X

This will need a lot of Village Disco events to compensate! Bring them back!

Sorry to hear that, but shame you had to include misguided hope for a vaccine without safety trials etc. Hope you’re up and running soon though. Stick to festivals 🤪

Well thanks for informing us so early as we come from our home in turkey by camper van to be at the festival and would not miss it for the world !

Inevitable unfortunately. Definitely the right decision. I think we're all just accepting 2020 is a write-off for festivals. It'd be hard to feel safe with limited access to taps, handwashing, and all the shared facilities etc. Let's look forward to better times...

The only decision to make but we'll all be there next year, just think how much beer money we'll have saved up by then 😂 better make sure there's twice as much as usual methinks 🍻🍻🍺🍺

Understandable. Safety is paramount in these times. Queen Anne's Revenge will be ready for next year!

Sad decision to make but fully understand that the safety of everyone is paramount. See y'all next year, stay well and stay safe x

We are in for next year

Must be so tough for you guys, stay safe, stay strong and we'll have a massive party in 2021. We'll definitely be holding on to our tickets. If you need to run any fundraisers, let us know and we'll throw something in. Something online with some of those who would have been playing, on the weekend this year? We would camp in our garden and watch. Big, big love <3

A very hard decision to make indeed. So sorry for you guys having to do all this extra work- but right decision. Hey-ho.. 🎶Sea Ya Next Year 🎵Keep safe ya'all 🐦❤

See you next year then 👍🏻 stay safe

Right decision - we'll see you next year instead! Next year is going to be very busy! 😉 xx Take care and stay safe! xx <3

UPDATE STATEMENT
Hi All,
Firstly, all the Chagstock Team hope you are all keeping safe and well and following Government guidelines and staying at home as much as possible.

I am sure many of you are wondering what is happening with Chagstock 2020. The answer at the moment is unclear. We very much hope that over the next couple of months we will get through this awful Pandemic and we can go ahead with the event. I am pretty sure there will be a lot of people ready to seriously party!

We are liaising with the local authorities and keeping a close eye on things as they develop and will update you with any decisions. We can’t promise the event will happen in July but we are working very hard and are in touch with agents, artists, suppliers etc. in order to discuss options. If we do have to postpone the event then of course all tickets purchased so far will be valid for the new dates so you don’t need to do a thing. If you can’t make the new dates then we will refund you.

Both you and we have worked very hard over the last 12 years to get Chagstock to where it is and it would be a shame to lose it. We are independently run and owned and are humbled to see how the independent festival and event industry are pulling together, so please bear with us and carry on supporting events such as Chagstock. ... See MoreSee Less

Fingers crossed and everything else

Fingers crossed, thanks for the updates 🙂 Stay well.

Everything crossed, and we would hold our tickets for any new date, even if it means holding off until next year. These are crazy times <3

Hoping for the best outcome. Stay safe everyone

Look forward to it when it happens xx

Thanks for update and do what you need to do when you need to do it. Just make sure that when it goes ahead you have double stock of cider as we will all need it 🙂

Another amazing addition to the line up for Chagstock Festival.

For Elles Bailey 2019 has been a hell of a year for the super-smoky-voiced, hard-working, far-touring chanteuse. On 8th March, she dropped her eagerly-anticipated second album ‘Road I Call Home’ to rave reviews, with the album charting in the Official UK Country Charts & Americana charts, gaining over 1.3 million streams since its release and reaching No.1 on the Amazon Blues Bestseller chart

No surprise but 2020 is full of tour dates for Miss Bailey on the road that she really does call home. When she arrives near you, don’t think twice, get there. A great evening and a long musical friendship will be waiting.

Announcing our Tunes-for-Trees campaign!
This year we wanted to go a bit further on the environment. We have calculated Chagstock's carbon footprint through how much electricity we use on site, and will be planting trees to absorb that carbon on or around Dartmoor.
Chagstock is working with tree planting charity Moor Trees who will be at the festival over the weekend.
You can even sponsor a tree of your own, or just learn about Moor Trees and the great work they do. ... See MoreSee Less