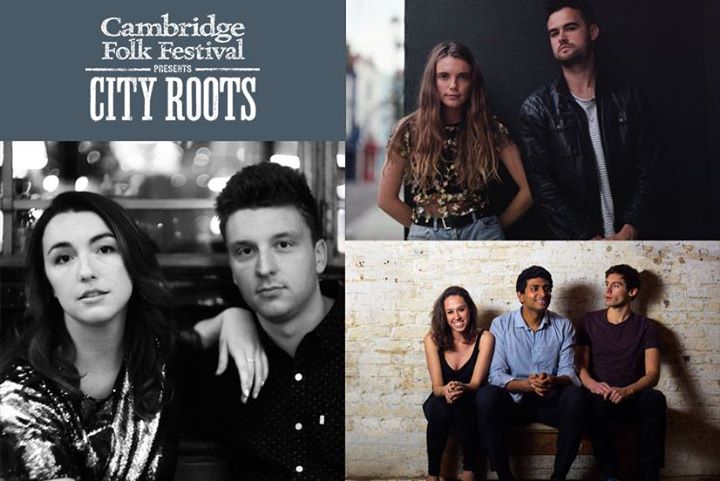 After the resounding success of last year’s first ever City Roots Festival, the event is set to return once more. Injecting the city with winter cheer and the spirit of Cambridge Folk Festival this February and March, Cambridge’s second city-wide winter folk and roots festival opens for an extended two weeks of exceptional music and events.

On the bill at The Boathouse on Friday 23 Feb:

Ferris & Sylvester – with clear references in their catchy folk setup to the mid-60s sounds of such musicians as Bob Dylan and Simon & Garfunkel, the duo also sit firmly amongst contemporaries like Laura Marling and Ray Lamontagne.

August & After – an indie-folk trio weave rich three-part harmonies upon classically-inspired layers of instrumentation. Songwriters Ned and Vedantha were inspired by the likes of Bon Iver and Kings of Convenience and after countless nights honing their vocal harmonies and intricate guitar playing, the trio was formed when they came upon Jordan, a classical violist, on London’s South Bank.

LOZT – pronounced ‘lost’, is a soulful Americana duo with a country edge drawn from both sides of the Atlantic. Lauren Scudder (USA) and Tom Ryder (UK) came together to create songs influenced by acapella, soul, folk and pop to tell stories with sharp-witted lyrics and soaring harmonies.

Today’s Lockdown Track. Tag a friend who was in the 200 strong audience choir, which joined Ladysmith Black Mambazo onstage at the 50th anniversary. Were you onstage? What was it like? Are you going to join our virtual choir? We’re ending sharing these lockdown tracks today, but will continue to gather more playlist tracks ready for our at Home celebrations. Thank you to all of those who liked, commented and shared your memories.

I was in Bella's choir 😊. Didn't get any video/photos as my then-toddler fell asleep on Hubby. 'Love going to the festival singing workshops as it's the only time I get to sing. Ended up singing on stage 1 again last year along with my son...and Hubby did get some photos this time!

Thanks for these, been some great memories

I was in that choir! Such a great thing to be part of.

Thanks for all the tracks.

Kathryn Price Helen Cook - we were there! Sadly didn't get any videos of it xx

Thanks for this series👍😁

It’s a very difficult time for the music industry, with festivals cancelled up and down the country and many of our peers facing collapse. Together, festivals support more than 85,000 jobs and many of those people are out of work and really suffering. To show your support for live music, please share a photo of the last show you attended and tag it #LetTheMusicPlay.

Live music will be back, but we’re going to need all your love and support to make it happen. ... See MoreSee Less

I go to loads of gigs and smaller festivals but Cambridge is always a highlight of my year. I miss it so much more than I imagined 😞

Sad Kimbo, was looking forward to it this year.I may be one of the many heads in the main photo. #letthemusicplay

Bella will hold an online choir event on Saturday 11 July from 11am to noon, where she will teach you to sing popular folk song The Parting Glass in three part harmony. As a little extra, if you would like to video yourself singing the song after the event and send it in to us, we'll put as many of those videos as we are able to together to create a video collage to be shared during the Festival weekend.

All participants should book their places using the button below no later than 8 July. You'll be asked how you want your ticket delivered - you can tick either option, as we just need email addresses for participants. We'll then send out the link to Bella's choir event ahead of 11 July, along with all of the resources you might need.

There is a suggested donation of £5 for the workshop, but if you are suffering financially do feel free to join without donating. If you can give more, then that would be much appreciated! Money raised will be used to pay the technical costs of this choir, with any additional profits going to Cambridge Folk Festival at Home artists and charity Help Musicians UK
👉👉👉 bit.ly/CambridgeVirtualChoir ... See MoreSee Less

Today’s Lockdown Track. Who remembers the Levellers first explosive headline appearance at Cambridge in 1998? It was quite a revelation at the time.

I had never heard of them before and was so surprised when so many people got up and danced, I now have more than a few of there albums and enjoy listening to them to this day....

We do. I particularly remember the mad panic of people who'd been sitting in the tent all day, of trying to pack up and get out of the way as the Levellers fans entered!

The Folk Festival at Home will take place over the same weekend when Cambridge should have happened, 30 July-2 August. It’s going to be a celebration of all things Cambridge that you can enjoy from your garden or living room: exclusive video content from some of your favourite artists, playlists to stream, talks and workshops to enjoy, and plenty of ways for you to join in.

BBC Folk Singer of the Year Bella Hardy will lead a virtual choir workshop on Saturday 11 July, teaching you to sing The Parting Glass in three-part harmony. You'll then have the opportunity to make a video of yourself singing and be included in the Virtual Choir, which will debut over the Festival weekend. Book your place here 👉 bit.ly/CambridgeVirtualChoir

Another highlight of the weekend will be the Songlines Interview, featuring Songlines Magazine editor Jo Frost in conversation with Fatoumata Diawara, which will be available to watch on Facebook.

There will be many more talks and workshops from the likes of folk singer Sam Lee, professional storyteller Alex Ultradish, a movement workshop from Sisters of Elva Hill choreographer Debbie Norris, and more.

Looks Great👍 Can’t wait to hear more😁 Hoping some footage from previous years will be used and that we’ll also see some familiar faces, like the comperes for example. Bit disappointed that the Mojo interview with Colin Irwin is replaced by the Songlines interview. Make it all as familiar as possible is my wish/ advice😊

this is so exciting! Where will this be streaming? Will you need to buy a ticket to watch or is it donations?

The Sidmouth Folk Festival are doing something the same weekend. At least this year I CAN be in 2 places at the same time! 👍🤩

My favourite was the year we sang with Ladysmith Black Mombazo such a thrill to be on the main stage with them.

Will you be doing virtual circus workshop's in the virtual Stage 2 on the Saturday and Sunday mornings? 😂😂

That will be wonderful... looking forward to it now...

Will you be showing footage from past festivals ?

Juliet Elisabeth the virtual choir!! (Maybe won’t be too hungover this time 🙈😂)

Janine, Michelle, Chris, Lindsay...well we have the willow 🤣