Boomtown Fair news: Stand up for what you believe in …Always !!

Boomtown Fair news: Stand up for what you believe in …Always !! 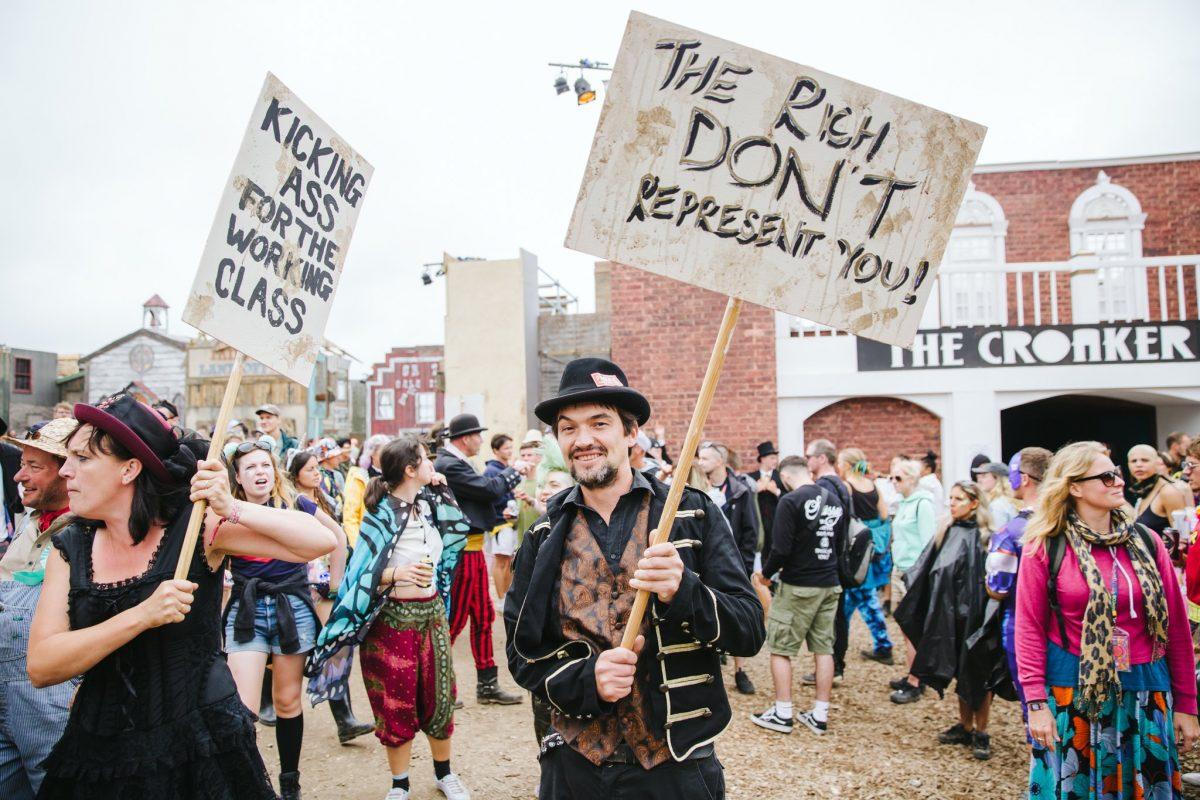 Stand up for what you believe in …Always !!

Prepare for the Copper County protests this August!! xx

We believe Black Lives Matter is a movement, not a moment. That’s why we’re teaming up with Beyond The Hashtag to continue the fight for equal rights worldwide. If you can’t make it to a physical demonstration, join the virtual protest using the hashtag #BeyondTheHashtag. Show off your signs, art or share something meaningful to you to make your voice heard. ❤️

Why dilute/splinter the #blacklivesmatter tag?

Last year when I was victim to your security being disgustingly racist I was met with nothing but dismissive responses. Been 9 months and still heard nothing about the outcome. If anything the replies I got read pretty uncaringly from your team. Practice what you preach.

Also Boomtown Fair maybe not having racist artists like Die Antwood headline, or even perform at all?

When it comes to the music we represent at Boomtown, perhaps none is more significant than Ska.

From the original 60s Jamaican artists such as Toots & The Maytals, Jimmy Cliff and The Skatalites that have played here, who took American Rhythm & Blues music and created their own take on it, or Freddie Notes who was one of the first Jamaican artists to bring Ska to the UK when he moved here in 1964, influencing not just the Caribbean communities but the Mods and eventually the whole country as the likes of Millie Small, who sadly passed away last month, hit the UK Top 10.

Ska would also of course influence the Punks here towards the end of the 70s, creating a revival movement that many know as 2Tone due to the record label who signed artists such as The Specials, Madness, The Selecter, The Beat, Bad Manners and Rhoda Dhakar, all of whom have performed with us over the years.

But the influence of those original Caribbean artists didn’t stop there, from The Bunker to Hangar 161 and the Third Wave American Ska artists who have performed on Town Centre such as Fishbone, The Hepcats, Mad Caddies, Less Than Jake and Reel Big Fish, it has been sewn into the fabric of Boomtown since the very beginning.

Then of course you had the Sound Systems, that sprung up to carry the music to the people. Without the likes of Ska selectors like Prince Buster, Coxsone Dodd, and Duke Reid, there would not be the same sound system culture that we know and love today. I don’t think any of us could imagine Boomtown without that.

In Jamaica, Ska eventually grew into Reggae but that’s a whole other story to tell.

This is the first in a new series... stay tuned for more! 🎶 ... See MoreSee Less

John-Arthur Meakin cos you love a bita ska x

biggest moment of babyheads career when toots said to me - dunno bout the beards and suits but you boys are irie!!!" we were coy as fuck

Rachel we could have listened to this earlier 😂

This is what I come for each year ska and punk

And that’s what originally attracted us to Boomtown, in which would have been our 5th year in 2020. It also influenced so many bassline offsprings like jungle and breakbeat from Congo Natty to Freestylers, Groove Armada to Dub Pistols. Toots was an absolute highlight as he always is. Look forward to enjoying the playlist Thanks Boomtown we miss you

Today we stand with organisations across the arts who are joining in solidarity with those who face racism, prejudice and injustice through #BlackoutTuesday & #TheShowMustBePaused.⁣
⁣
But this is not limited to one day or a social media campaign... We pledge to better ourselves as allies in this fight, a fight that is all of ours to win. We pledge to do everything in our power and with our platform to dig out racism and prejudice from the roots, and raise awareness to the ongoing injustices that pollute this world.⁣
⁣
Those of us who strive for a better world must passionately join together and claim it for all of us. Not just through joint campaigns and hashtags, but through actions, awareness and education. We must all be better. The world deserves it but most importantly, humanity needs it. ⁣
⁣
Here's a whole list of incredible articles to read to fully understand the situation, and what can be done to fully support and take action: bit.ly/BLMresource⁣
⁣
#GeorgeFloyd #SayHisName ... See MoreSee Less

Saying "all lives matter" as a response is thoughtless. It detracts from the fact that they clearly don't....otherwise black lives would not being disproportionately ended. If a kid cuts their knee you don't put a plaster on all kids' knees. You help out that one kid and keep the same level of care going for all the others at the same time. Saying black lives matter does not stop all other lives mattering. It identifies a problem that needs to be talked about. White people, we need to get over feeling all "but I'm not a racist" about it.... our feelings are not important in this problem. Please think before saying "all lives matter" cuz it's a dumb response to a really horrendous issue.

You need to block out your profile picture it's not a marketing tool.

I notice the only people shouting 'All lives matter' are white 🤔

Joseph Smith did they ever do anything about the racism you received last year?

For those who say all lives matter. White lives already matter, we don't have to fight for the same equality that black people and POC do. All lives will matter when black (& POC) lives matter.

Just saying, ive been known to hate everyone equally, no favourites you could be Black, White or other i don,t care. But these protesters need to go home , so not to give a leg up to all the rioters opportunists thief's looters who will gladly bring a country to it knees destroy a small business without blinking a eye

Shocked at how many ppl on this page r so ignorant 🙁 especially when it's coming from a place of white privilege. White ppl do not need ppl to protest or post about how their lives matter... they have not been treated unequally. Please do some research before posting this all lives matter crap.

Created by black people, we are now stopping the show. The movement is created by 2 black women. The world takes, takes, takes and puts us in a box even though we probably created the box in the first place. Fuck the box, we are not going to stand by and continue business as usual. Media black out... we are taking black ownership of our art & soul. #TheShowMustStop Use this time for conversation, personal creation and researching how you can better support, promote and understand black people, culture, inventions, music origins, history, business, traditions, all of the tings.. use this time! This is not a day of silence.. this is a day of formulation. 🖤✊🏾💜✊🏽💙✊🏻🤎✊🏼❤

What about the cunts that are out looting small businesses?imo there lives mean nothing! If they die they die!

This was an unfortunate fail, fell on deaf ignorant ears 🤦 How disappointing #blacklivesmatter #theirprotest

People saying "All Lives Matter" as a rebuttal to "Black Lives Matter" really do not get the point. After all, how many of the people saying "All Lives Matter" had their forefathers and mothers chained on boats? Shackled on ships? Hung from trees? Burnt above fires? Whipped in the fields? Banned from voting? Bared from seats? How many? Eh? JUST HOW MANY? You see the whole point about Black Lives Matter is to say that if ALL lives matter, then stop treating Black people like this. You see if ALL lives really did matter, then why are Black people still continually subject to racism? How can ALL lives matter if Black people are still oppressed on a DAILY basis? How can ALL lives matter if the statistics show that the vast majority of Black people are excluded from the highest paid jobs? And how can ALL lives matter if Black people are many times more likely to die in police custody than White people? Do you understand? So, my White friends, I am calling on you to call out those who say "All Lives Matter". I am calling on you to tell those that say this why it is INAPPROPRIATE to do so, just like it is INAPPROPRIATE for a white person to use the N word. I am calling on you to inform those that rebut with "Oh, but white lives matter too", by educating them to the underlying reasons as to why such a comment is WRONG. I could go on and on but I will park this right here for now. Please do this. Can you? Surely this is not too much to understand or ask.

white privilege noun inherent advantages possessed by a white person on the basis of their race in a society characterized by racial inequality and injustice. "I'll be the first to acknowledge that I do benefit from white privilege" There are a lot of people of people on this thread who need to check themselves. Imagine being so insecure that you get triggered by a campaign for racial justice.

A sudden and unexpected five months to explore, learn and develop has opened doors that were almost impossible to step through before...

Aiden Blair Elliot Ward WHAT DOES THIS MEAN

Ben McCluskey what 😂 make sense of this plz

Beck Todd what does this mean😂

Oooooh what does this mean!!

obvious this means its going to be the BIGGEST BESTEST AMAZING FREAKING BOOMTOWN EVER!!!! WAAAAAAA!!

Chelsea Hargreaves see it’s gunna b even better next year

Ruby Read what Is this supposed to mean?!?!??

Winter festi lads, do it

We may be distanced but we will use this time to grow stronger as a community... ❤️
More details coming very soon 🌞🌎

The Copper County gates won’t be closed too long! 💔 There’s going to be some epic catching up to do in 2021! 🥰

Lee Harris no birds, but do I detect the hand of Xander controlling the strings?

Grace Robertson this gives me such big feels

This video makes me miss Boomtown so much 😭😭

Lucy Davey hmmmmm interesting. What they going to do!!!!