Belladrum Tartan Heart Festival news: Pupils of Culloden Academy are taking part in a trip to Romania to run a camp f…

Belladrum Tartan Heart Festival news: Pupils of Culloden Academy are taking part in a trip to Romania to run a camp f… 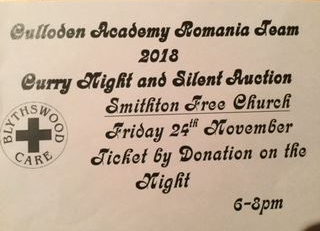 Pupils of Culloden Academy are taking part in a trip to Romania to run a camp for disadvantaged children and community work.
They are hosting a charity curry night to help raise funds in association with Blythswood, on Friday 24th November and you can WIN 2 BELLA 18 TICKETS while raising funds for a great cause!

🎟 ⏰Reminder that our first 2021 ticket resale will take place in 30mins time (10am) on www.skiddle.com/festivals/belladrum/tickets.html ... See MoreSee Less

Managed to get 2 tickets but no camper van pitches left so didn’t go through with the purchase. Also wanted disabled pitch but couldn’t find how these were booked. Disappointed!!

When do the remaining payments for original payment plans for 2020 get taken? It wasn't taken in May or June. Thanks

Any joy Graeme? We gave it a go and got some, couldn’t get a camper van ticket tho, hopefully they’ll come up again.

The pay monthly tickets ran out within first 10 customers do more go on sale?

You can get kids tickets the noo👍

Richard Badger Geddes can you try too?

Lyndsey Main are we going ?

Hands up who is looking for 2021 Belladrum tickets?

Our first 2021 Ticket Resale will take place on Monday 1st June at 10am.

Please note it is looking like there will be a very limited number of tickets available on Monday and remember there is no need to sit in a queue for hours in advance as Skiddle's ticketing system will randomly allocate everyone a number in the queue who is online at 10am. ... See MoreSee Less

Why is it asking for a code for children’s tickets?

Im on to get child ticket but says enter code. Any ideas?

Graham Doig are you guys looking for 2021 tickets?

Heather, if you're no coming to Russia