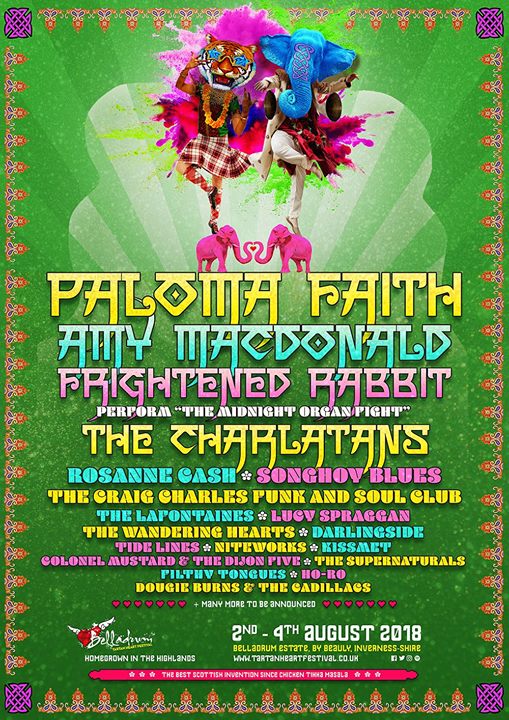 Belladrum Tartan Heart Festival has announced that Paloma Faith will top the bill on the festival’s Friday night. With her acclaimed Number 1 album ‘The Architect’ riding high in the charts and a BRIT nomination for Best British Female, Paloma Faith is set to deliver an unforgettable Garden Stage performance.

For more than two decades now, The Charlatans have been an inspirational force in British Indie Rock, with 13 albums under their belt and 17 top 30 singles, they will have a huge back catalogue to pull from for their debut Belladrum performance.

Also appearing over the weekend are Skye’s Niteworks, a band known for their use Gaelic language and traditional music with electronic influences to create a fresh and exhilarating sound. Completing this wave of line-up are The Filthy Tongues featuring members of Goodbye Mr Mackenzie and Angelfish, trad-folk act Hò-rò and local rock and roll artist Dougie Burns and the Cadilacs. A huge number of acts including the Saturday night Garden Stage headliner remain to be announced.

😍Our first Interactive activity for our Virtual Festival is now live!

✂️🖍🖌Grab your glue sticks, scissors, tape and get crafting your very own 'Wacky Tacky' Belladrum Tartan Home Festival Fancy Dress, using recycled items and anything you have lying around your house with The Libertie Project Ltd!

Send in photos of your creations to hello@tartanheartfestival.co.uk for your chance to win a bumper craft pack courtesy of The Libertie Project.

Show your support for the Live Music Sector today.

UK live music has been one of the UK’s biggest social, cultural, and economic successes of the past decade. From world-famous festivals to ground-breaking concerts, the live music industry showcases, supports, and develops some of the best talent in the world – on and off-stage.
As important as it is, our national and regional contribution isn’t purely cultural. Our economic impact is also significant, with live music adding £4.5bn to the British economy and supporting 210,000 jobs across the country in 2019.

Like every part of the entertainment industry, live music has been proud to play our part in the national effort to reduce the spread of Coronavirus and keep people safe. But, with no end to social distancing in sight or financial support from government yet agreed, the future for concerts and festivals and the hundreds of thousands of people who work in them looks bleak.

This sector doesn’t want to ask for government help. The venues, promoters, festival organisers, production companies, agents and many other employers want to be self-sufficient, as they were before lockdown. But, until these businesses can operate again, which is likely to be 2021 at the earliest, government support will be crucial to prevent mass insolvencies, and the end of this world-leading industry.

Government has addressed two important British pastimes - football and pubs - and it’s now crucial that it focuses on a third, live music. For the good of the economy, the careers of many, and the UK’s global music standing, we must ensure that a live music industry remains when the pandemic has finally passed.
#letthemusicplay ... See MoreSee Less

☀️We took a stroll through the site yesterday pulling together plans for our virtual 'Tartan Home Festival' on 1st August!🎪

🎫Reminder our next resale takes place tomorrow at 10am from 👉 bit.ly/2Vuxie4

* Please note there will be a very limited number of tickets available but the resale will continue on or around the 1st of each month with any returned tickets. ... See MoreSee Less

Never seen it like this lol, grass needs a good cut lol

Louise Riddoch get all tickets

Em Ma you could try and get tickets for next year 😊

Looks so lush ❤️ great to see it in its natural state.

Lani Jayne Elrick DO IT

Lauren Herbert are you going to try again? X x

Hazel Coutts it looks so different!

Haha. I can mark the spot where I got sunburn at Bella 2011.

Cannot wait for next year!! ❤️

Just teasing us . A long wait until next year. Cant believe im not going to bella this year

Gutted there is no Bella this year, doesn’t feel right not to be going! Roll on 2021

Look the part during your virtual Tartan Home Festival with the official 2020 'Living it up in Lockdown' T-shirt.

Just like we couldn't bear 2020 to pass without Belladrum Festival taking place (in virtual form), we also didn't feel it would be right for the year to pass without an official Bella T-shirt to commemorate the event and add to your collection!

Available to pre-order now in both adult and kids sizes in a variety of colours - belladrumfestival.bigcartel.com/ ... See MoreSee Less

Cait McCourt you getting one of these??I might...wish there was small enough one for Isabell xx

Jean Bell I think me and Elsie need one of these 😎😉😘

Erm, anyway you can be a bit more ‘considering’ with the sizes of this tshirt 🤔 Belladrum PR people, the UK average woman is a size 16 and that’s your biggest women’s size 🤷‍♀️ not necessarily asking you to accommodate the professional fatty such as myself who is a size 24 but come on 🤷‍♀️ stop being silly 😑

Tricia Inglis I got mine 🤪🤪