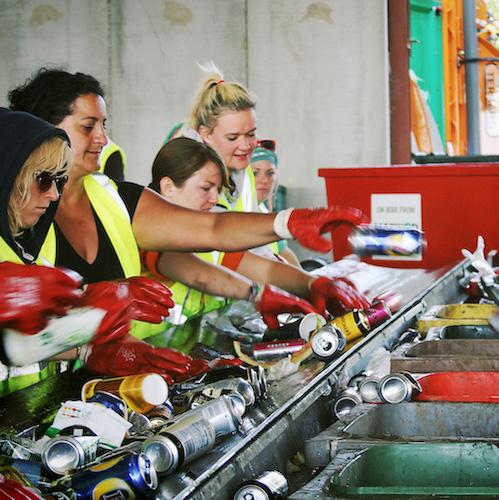 In the first of our new Green Glastonbury stories, the Festival’s Waste and Farm Infrastructure Manager, Robert Kearle, tells us about the on-site recycling centre and how you can help to reduce waste.

Last night, buildings, structures & monuments - including the Pyramid Stage - were lit in red to highlight the plight of the UK events industry and urge the government to support the sector.

Well, I’m glad they took a photo otherwise no one would have seen it.

Regardless of what support the Government can give I hope we can all pull together to support the things that matter to us! X

How about every person who went to Glasto in the past and didn’t pay for a ticket, donates a minimum of a tenner: I.e anyone who jumped the fence, used a dodgy wrist band, crawled through a tunnel, OR blagged a freebee from a mate of a mate who works on site... surely that’s several million £ right there?? (Personally I owe Mr Eavis at least fifty quid) 🙄

The government can't even properly support the NHS, and other vital services. What makes you think they will support the the music and entertainment industary. But they should

They did support the NHS by lighting number 10 blue and encouraged a nice clap for them. I’m sure they really felt supported by that

Hope they get some funding ... fingers crossed here ... looking forward ... less than a year away now mind ... be great if some big names did a few gigs / festivals at expenses only or dare I say it free of all fees ... and all the ticket sales money goes to support the events sector as well as the government cash help ...

Amazing how that metal frame can look so stunning

Why not ask some of our millionaire pop stars to donate towards this as well.......

Goodnight all. Hope you had the best #GlastoAtHome weekend. Thanks to all our areas & stages for their amazing virtual efforts, and to the BBC for doing such a great job with the coverage. #Glastonbury2020

Amazing and depressing at the same time ... missing the free hugs and rubbing shoulders xx till next year my fellow Glasto lurvers xx

I'm currently rocking out to biffy Clyro on bbc I player 🙂

Watching that Bowie set in full for the first ever time is undoubtedly the highlight of 2020. It's been a year full of misery but that was a sign of hope that there are better days to come. 👍

Brilliant showing of numerous acts. Thank you BBC 2 and I-Player for such great coverage.

Great to watch the Legendary Bowie in full again. One of the best Free weekends. Thanks for the hole in the fence🙏👍

At least I didn't have to go through that sudden Sunday evening realisation that hits me every time I've been when I remember that life outside the super fence still exists and I can't actually live in Glasto world forever.

It’s been great. Bringing back some amazing memories. Round of applause for Michael and Emily Evis and ofcourse the BBC for bringing home what is the best festival on earth.

Loved it a lot. Thank you BBC for reminding us of how important live music is and also the BBC.

Beyonce. Cold play. Adele Chic featuring Nile Rogers Bowie. Among the very best performance put on by the BBC... Seeing David Bowies performance for the first time was incredible both band and artist were amazing to watch and listen to.

Was fantastic, reliving some cherished memories, cant wait to get back down the farm and create some more 🤞fingers crossed I somehow get tickets for next year..!

Brilliant by the bbc,my family was meant to be there this year but a great effort by the bbc to keep us entertained

Thanks to the BBC for the memories. Especially 2016 when Adale played. Really good set.

A fabulous weekend of music. Beyoncé was phenomenal, Adele fabulous. Also enjoyed watching ELO, Kylie, David Bowie, highlights of the Boss and the legends programme. Also been watching various clips on YouTube including Stevie Wonder, Paul McCartney and the Wombles!!

It was amazing reminiscing with you this weekend, we can't wait to be with you again next year 🙌

It's been amazing, especially watching David Bowie. Thank you Michael and Emily and the BBC. 🌟

Next best thing to being there, which is of course being there!! Just watching Ed owning the stage again at my first one in 2017! Thank you it’s been emotional!! ☺️💖🌻xx

Some fantastic memories of the most epic festival known to man. I love you guys and thank you x

Thank you so much for this very special Glastonbury at Home weekend. This is my most favourite weekend of the year, and this year was no different. It was great to see so many great sets again from years gone by. Thank you to the Eavis family, the Beeb, and to all those great performers and performances, and for being able to see the whole David Bowie set from 2000. As always, just the very best festival on the world...even when it's a virtual festival. Xxxxx

Joe Rush interview was really special I thought. Thanks Glasto, Beeb and all the crew that made it happen. Here's to next year ♥️👏

Thank you for the music.🙏 Especially the full Bowie set and some other classic sets that I was at but have never seen. The set I want to see the most? Jeff Buckley on the NME.

I've sung my heart out, danced, laughed, cried and taken photos from my TV screen! Loved it all, thankyou <3

I don’t thank BBC much these days, but in the absence of the actual festival this year #GlastoAtHome was a real treat! Thanks to all, it made for a lovely weekend and I’ll continue watching performances for as long as they remain available on iPlayer. I suggest...don’t delete them until next year!!

It was great, thank you to the BBC. Still got a couple of things left to watch, Amy and Ed. My other half said he still felt that proper 'after feeling' last night when it finshed!

Our 'Hope Shines Brightest' #Glastonbury2020 merchandise is still available from our web shop for a limited time, with all profits to Oxfam, Greenpeace UK and WaterAid UK. ➡️ glas.to/shop
Big thanks to everyone who's already bought something! ... See MoreSee Less

I wish the teatowel design was on a t-shirt!

I ordered mine in good faith early June with tote bag and tea towel ready for this weekend, due to arrive 22/23, receive an email on 23rd saying that won’t be here until next week - after Glastonbury weekend! Poor show!!!!

would love the tote bag but seems their sold out, got anymore coming soon Glastonbury?

Still waiting for mine - ordered on 3rd June!

Are you getting more of the Mind The Longdrop posters in stock?

My T-shirt’s arrived for myself and 2 grandkids. Love them Thankyou.

Got mine it's lovely

Wearing mine right now, love it

Wow it seems it takes a month for delivery and I paid £9.95 for postage don’t understand the logic .

Love my shirt! Greetings from Germany 🌸

Ordered well in advance but sadly nothing has arrived. Had an email saying it had been delayed, not much use now. Really disappointed especially when lots of others had theirs all ok 🙁

Has anyone managed to buy a frame that fits the ‘Hope Shines Brightest’ poster? Can’t seem to find the right size frame anywhere, not even IKEA can save me now!

I’ve still not received mine even though I had an email saying it was dispatched last Thursday. Was starting to worry I’d been had by a Facebook scam so cane back to this page to see if others were having the same problem.

Patrick Hoban this is what I was one about

Much more interesting than the wall-to-wall coverage of Beyonce, Adele, Coldplay

Funny how the BBC didn't have Rolf Harris on there, just burying their sytemic child abuse as if it never happened

Neil diamond was truely amazing but for me its brian Wilson.. wonderful wonderful memories of that set 🙂

Kylie and Dolly mimed their way through ....

It's gotta be for me the Foo Fighters. You get true value with their circa 4 hr performances!

Patti Smith was amazing. The gig b4 Lionel n much better

Was this moment...when I wanted to sit in a puddle of mud to watch the magic numbers, as with being short I was sick of not seeing the stage!! But ended up missing it as so many people wanted to take our picture! Glastonbury 2007 was amazing xx

Johnny Cash , no doubt about it , been lucky enough to have seen them all , think it was his set that started the whole Sunday legend slot thing , X 🌞🌈 🎸🍷🍷🍷

As a Canadian who has lived in the UK before I'm kind of surprised to see Dolly, WIlly and Kenny Rogers there. Country music isn't that big there so I'm surprised people know who they are.

The ones I enjoyed the most would have to be either Lionel Richie or James Brown !

Ray Davies. One of the many times I’ve cried at Glastonbury. I’ve just almost cried again watching him on tv.

He is. Loving the highlights on BBC tonight. Just missing a few faves

I feel as if I have gone back 50 years

Coldplay, Ed shearan, Adele , they all rocked it for me 🎉