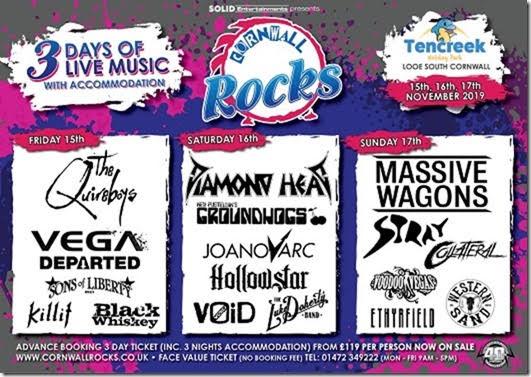 Solid Entertainments have today announced that Cornwall Rocks will be held at Tencreek Holiday Park in Looe on 15th, 16th and 17th November 2019

The line-up for their first rock festival in Cornwall had to tick all the right boxes.  With The Quireboys, Diamond Head and Massive Wagons headlining plus fifteen other very different, but striking bands performing, this will undoubtedly be a great festival and one live music event not to miss in the South West.

The full line-up over the three days is as follows:

The Quireboys are certainly enjoying a revival selling out venues around the world with 2018 also taking in The Monsters of Rock Cruise, HRH AOR VI, Sweden Rock and Stonedeaf festivals.  2019 will see a brand new studio album their 12th as part of a pledge campaign.  So why not be a part of the never ending Quireboys party as there’s no sign of Spike, Guy, Keith and Paul slowing down any time soon.  Have a look and listen to Seven Deadly Sins…

SATURDAY – Diamond Head • Ken Pustelnik’s Groundhogs • Joanovarc • Hollowstar • Void • The Luke Doherty Band With Diamond Head’s new line-up of Brian, Karl, Abbz, Rasmus and new bass player Dean Ashton they toured the UK and Europe plus US and Canada in a massive 27 date marathon over 33 days, quickly selling out of albums and merch at many venues.  The band are all excited to be working with Siren Management and that the new album The Coffin Train will be scheduled to release via Silver Lining Music on May 24th 2019. Have a look and listen to them playing live at Rockpalast in 2018…

If ever there was a band that personified the phrase “good things come to those who wait,” it’s Massive Wagons.  Whilst the Lancaster hard rock quintet have been active for a decade now, 2018 was the year the band truly made their mark on the music industry, touring with the likes of Status Quo, Dead Daisies and The Wildhearts, and landing at No. 16 in the UK Top 20 with their fourth LP, ‘Full Nelson’.  Have a look and listen to the official video of Under No Illusion in 2018

To host such a classy line-up, the venue itself and location of the festival had to be equally impressive.  Situated in a beautiful part of the country, Tencreek Holiday Park is set in beautiful countryside with stunning views of the sea and excellent facilities just outside the Cornish seaside town of Looe and nearby fishing village of Polperro.  So, if you want to chill out before the music starts (literally), why not have a stroll on one of the beautiful bays in the area, with secluded coves and wide stretches of golden sand and crashing surf.

With accommodation for the weekend being just a short walk from the music you won’t need to worry about booking that taxi to take you home or to a hotel at the end of each night.  Also parking is free for the weekend – so you don’t have to worry about where you leave your car.  No need to search for food and drinks on the day either, there will be a range of alcoholic/non-alcoholic beverages, real ales available and a varied menu that should meet everyone’s taste!

So whether you’re local to Cornwall, travelling from the other side of the country or overseas to be at the event you’ll only have to focus on the music and enjoying yourself.  You can check out the facilities at the Park at https://www.dolphinholidays.co.uk/cornwall-caravan-holiday-park/